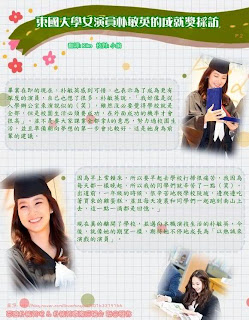 Interview with actress Park Min Young who will receive the merit award from Dongguk University
“Because I was very busy with acting activities, I had thought I may not be able to graduate. Graduation is a bit late for me (the age), very ashamed about that, but it is a very good thing for me.”
“Hello everyone. I am Park Min Young, specializing in acting, of the 45th batch!” She who always used to energetically greet her seniors, went to school at 8 am in the morning and cleaned the theatre along with other students through the early period at Dongguk. Later in her third year, she debuted through “Unstoppable High Kick” and as the lead in “I am Sam” and had to manage her studies and acting career at the same time.
“Though I tried to attend school as much as possible, because we had to shoot drama, the number of days of attendance was not enough… as a result, I received a warning notice (laughs), so I applied for leave of absence, but my leave period of three years was running out” (laughs). This is the reason why Park Min Young decided to graduate after nine years. [note: In the credit system of the university, if you don’t finish at least half of the courses you have opted for, you will receive a warning. If it is serious, you can even get expelled. To prevent getting expelled, sometimes students start dropping out before the end of the first semester. ]
Park Min Young who debuted at a young age has been on the other hand quite active on screen taking on one leading role after another. With her able interpretation of the varied appearances and personalities of different roles in a variety of genres such as historical drama, modern drama, spy action, etc., she has become a representative figure of actresses in their 20s. In the process of leaving an image of “actress Park Min Young” in the minds of the public, she had to experience many ups and downs.
“My debut was quite easy, but I was so young and got so much love from the public, but I had not been adequately prepared . It was only later that I was able to find my true position and capabilities. Gradually, my true instincts showed themselves and I was able to overcome the low tide in my career.”
Park Min Young the actor realised that if you don’t work hard, you won’t be able to get out of the slump. It took her 1 and a half years to get over the slump. Finally, to reach a point where she could be carefree about the TV ratings or even enjoy acting, all this took a lot of effort.
With her graduation around the corner, Park Min Young feels that to have greater depth as an actor, one needs to think a lot. Park Min Young said, “I feel like I have come for an address at the admission office (laughs). Although there is no need to feel that school is all of life, but if your school life is successful, your chances of success outside are high”. “That does not mean you must get A for all of your courses in campus, but if you try your best in your school life, you will be better prepared for the first step towards your dream”, this is Park Min Young’s advice as a senior.
“Because I often used to stay in bed in the morning, it used to be painful to get up early in the morning and go to school to clean and because I used to be late, my classmates had a hard time doing the cleaning (she means because of her being late, her classmates needed to do her cleaning work. )[Aren't her classmates so nice and don't they deserve 10 % of her merit award? ^_^] In the early years before my debut, finding it hard to climb the steep slope to university, buying chicken cake and eating it and running up the mountain with my classmates early morning every day – each small thing in school now is a beautiful memory.
Now after leaving school, her life as an actress has become the most important part in Park Min Young’s life. From now on, as she expects, she wants to grow and to become “a dedicated actor”.
Source: http://blog.naver.com/ilovedongguk/50163219164
Translated by Park Min Young International Fans United into English from the Chinese translation of the Korean article by Kiko. Cre: Kiko and Sora, Baidu Park Min Young and Park Min Young International Support Group.
Help with english translation and Proof-reading – renelhuanglei, Park Min Young baidu


Posted by Unknown at 1:01 AM
Email ThisBlogThis!Share to TwitterShare to FacebookShare to Pinterest
Labels: dongguk, park min young